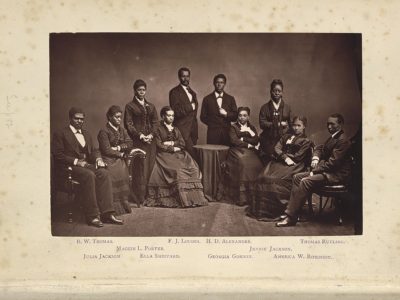 The eminent scholar W.E.B. Du Bois once described African American Spirituals as “the most beautiful expression of human experience.”  Remarkable art is sometimes created out of a place of pain and conflict.

Though the Spirituals were born from the experience of enslavement in the United States, they had an interesting revival in the late nineteenth and early twentieth centuries before leaving the footprints for other musical forms that would follow.  Join historian Dr. Lindsey Swindall for an afternoon of reflecting upon and listening to this poignant music.

The event is Sunday, March 28 at 4 pm, and will be livestreamed on YouTube/Facebook/Twitter, with very limited in-person attendance, with masks and social distancing required. The talk is free for Hoboken Museum members (and students), and donations are welcomed.

Dr. Swindall teaches at Stevens Institute of Technology.  She earned her doctorate in Afro-American Studies from the University of Massachusetts, Amherst. She has written several books on radical activism in the New York City area including The Politics of Paul Robeson’s Othello and Paul Robeson: A Life of Activism and Art. She is also the author of The Path to the Greater, Freer, Truer World: Southern Civil Rights and Anticolonialism, 1937-1955, which came out in paperback in 2019. She has also co-edited a volume titled American Appetites: A Documentary Reader.