The Weehawken Dueling Grounds is a place where dueling was done between 1700 and 1884.  It is located below the cliffs of the New Jersey Palisades, right next to the Hudson River.  There were at least 18 known duels to occur there between 1700 and 1884, but is most famously known for the duel between Alexander Hamilton and Aaron Burr in 1804 where Hamilton was fatally shot by Burr.

The first monument to commemorate the duel was erected on the dueling grounds in 1806. By 1821, it had been taken apart and removed by souvenir hunters. Other small markers later appeared at the dueling grounds. The site was disturbed in 1858 when a road was cut through it. In 1870, the Weehawken shoreline was reconfigured for the railroad tracks, and the dueling ground site was obliterated. In 1894, a stone bust of Hamilton was placed at the site of the current monument. It was ruined by vandals in 1934.

The bronze statue of Hamilton which stands here today was sculpted by John Rapetti in 1935. Behind the base of the Hamilton bust there is a boulder which folklore claimed Hamilton rested on after being hit in the duel. The boulder does have historical value, whether or not Hamilton rested on it, because it is a surviving physical connection to the original dueling grounds.There is a small park called Hamilton Park located next to the monument. The park offers a great place to enjoy the fantastic view of the Manhattan skyline. 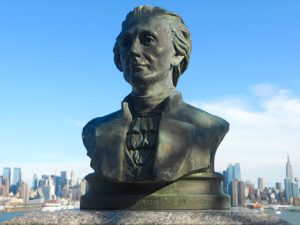 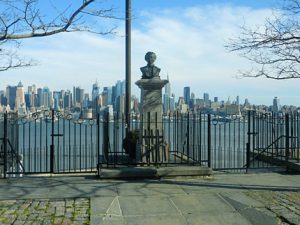 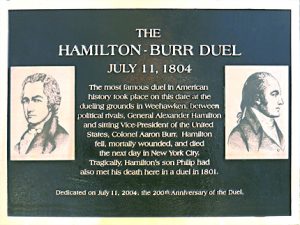