-Was awarded a grant of $700,000 to restore the station in the 1990’s by the New Jersey Historic Preservation Bond Program

-Constructed in 1907 as the Delaware, Lackawanna and Western Railroad Terminal Complex, Hoboken Terminal was designed in the Beaux Arts style by architect Kennith Murchinson. The terminal was a milestone in American transportation development, combining rail, ferry, and pedestrian facilities in one of the most innovatively designed and engineered structures in the nation. Hoboken Terminal was the first use of the Bush type train shed, which quickly became ubiquitous.

-Today, commuters and sightseers can again catch a ride across the Hudson just as they could have generations ago during the “Golden Age” of rail travel.

Hoboken Lackawanna Terminal was first restored in the latter 1980s bringing it up to standards for general commuter service. However, its most thorough restoration began in the mid-2000s when plans were formulated to restore the structure essentially back to its original appearance. After its first restoration in the 1980s, Hoboken Terminal received a more thorough update beginning in the 2000s with the restoration of its iconic clock tower, unveiled to the public in 2007. The tower is entirely authentic with a clock, keeping time, at the top and adorned in matching copper.   Additionally, the original neon-lit “Lackawanna” sign also has been added to the tower. The last restoration project of the building was its ferry slips, completed in 2011 and again serve in their original capacity as they did decades ago.

While long distance trains may never again call at the station it has held a much better fate than many other grand railroad stations and terminals across the country, and besides still serving in much of its original function you can visit the building any time you wish to see the magnificent architecture of the waiting room, concourse, and even the train shed of Hoboken Terminal. 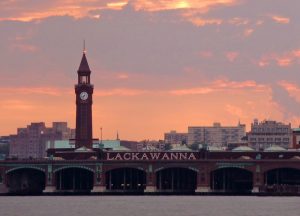 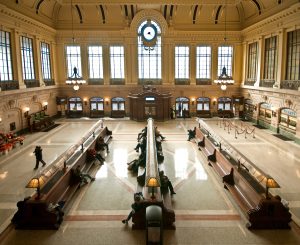 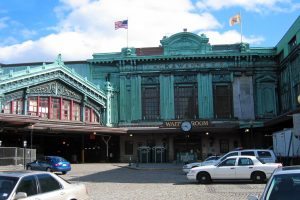