Joan Michel is an award-winning professional photographer-filmmaker with an impressive list of clients in the fashion world and other businesses. After starting her photography studies at School of Visual Arts in New York nearly a decade ago, she recently completed her Bachelor of Arts degree at New Jersey City University, majoring in Media Arts with a concentration in film making.

Her final thesis project, completed earlier this year, was inspired by her interest in skateboarders. She produced a fascinating film, “Cavemen Built My Skateboard,” about a young skateboarder, Iggy Manzanero, whom she met in Jersey City. Impressed as much by his warmth and openness as by his dedication to perfecting his skills, Michel captures this special young man’s character in a short film that showcases her skills with a variety of shooting styles and techniques.

There’s an old Hoboken saying: “If you can’t find it on Washington Street, you’re not looking hard enough.” The Museum’s curatorial team has taken up the challenge with its latest exhibition, opening August 1: “The Avenue: A History of Washington Street.”

Tracing almost two centuries of vibrant community and commercial life along Hoboken’s main artery, the exhibit packs in hundreds of artifacts and photographs from scores of beloved and largely family-owned establishments that have drawn people to The Avenue for generations.

Visitors can figuratively stroll the length of “The Avenue,” teleporting back and forth in time, as they search for artifacts from their favorite businesses and discover the wide variety of businesses that catered to earlier residents of the Mile Square City. Stretching nearly the full length of the Museum’s north wall, an enlarged, detailed reproduction of the 1951 Sanborn fire map (from the Jersey City Library’s Hudson County History collection) shows every building block-by-block from Observer Highway to 14th Street. 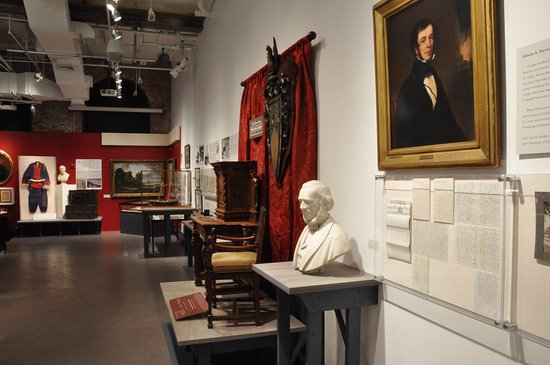