Have you ever wondered where baseball was born? It was Hoboken, New Jersey! Elysian Fields, or as a native Hoboken resident may call it “the birthplace of baseball”, is said to be the site of the first organized baseball game between the Knickerbockers and the New York Nine in 1845. At the time, Elysian Fields was one of the only places across the Hudson River in Manhattan that provided suitable grounds for baseball and therefore became perfect playing ground for the Knickerbocker Club of NYC. Over a decade later, Henry Chadwick, who went on to develop baseball’s statistics and scoring system, was inspired by the Fields, noticing that baseball soon would become a national sport for Americans. Unfortunately, after a strong 25+ years, large baseball parks started being developed in Brooklyn, and the fame of the fields diminished. Today, after many years of development, only a small portion of the field remains but can be seen on the west by Hudson Street, on the north and east by Frank Sinatra Drive and on the south by Castle Point Terrace. 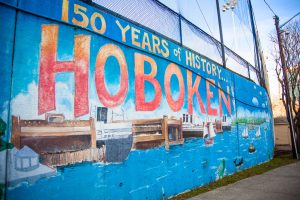