It is important to highlight the story of Jersey City’s railroad infrastructure because it once served as the gateway to America for people and production. Jersey City is historically significant in building the industry that powered this United States economy. Between 1907 and 1920, the Erie Railroad used 250,000 tons of dynamite and blasted through 800,000 cubic yards of blue trap rock to create the passage and lay the four passenger rails that would serve the members of the Jersey City community.  The open cut sections of the Bergen Arches were one of the deepest excavations ever made and one of the greatest engineering feats within the us railroad industry.

The Bergen Arches started as an idea to activate the Erie cut in Jersey City, which has been underutilized since 1957 and is now owned by NJ Transit. Our goal is to create a single path for biking and walking as part of a shared-use space, where the community can experience historic infrastructure, nature, and beautiful art and graffiti in one of the densest populations in the country. Now, our organization believes the arches can help connect an entire network of multi-use transit options for our city. The Bergen Arches are well-positioned  to connect the Essex-Hudson Greenway and the Sixth Street Embankment. Together, all three would activate an 11-mile greenway corridor that would connect nine different cities, including Jersey City, Secaucus, Kearny, Newark, Belleville, Bloomfield, Glen Ridge, and Montclair! 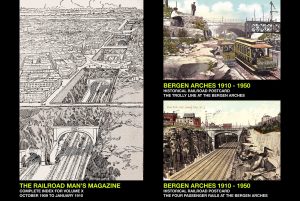