One of the most prolific and recognizable artists alive today, Ron English has bombed the global landscape with unforgettable images, on the street, in museums, in movies, books, and television. English coined the term POPaganda to describe his signature mash-up of high and low cultural touchstones, from superhero mythology to totems of art history. Populated with his vast and constantly growing arsenal of original characters, including MC Supersized, the obese fast-food mascot featured in the hit movie “Supersize Me,” and Abraham Obama, the fusion of America’s 16th and 44th Presidents; an image widely discussed in the media as directly impacting the 2008 election. 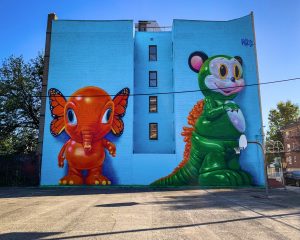