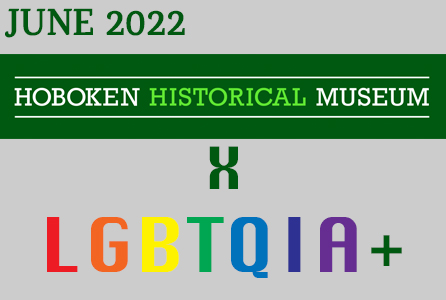 PRIDE Sunday, June 5, 12 – 6, at the Museum, 130 Hudson Street. Admission is free, donations are much appreciated.

Pride in the Passageway:  noon until – 4 or 5. Hudson Pride Center will have an information table and Hoboken Rainbow Family is sponsoring an arts and crafts table for kids and families, among many other offerings. If you’d like to join the tabling, click here.

David De la Fuente is an animation artist with interests in the moving image, aesthetic theory, semiotics, and graphic design. His work has explored themes of loss, queerness, and romanticism. His films have been shown at festivals and screenings around the world. Currently, David is based in New York where he continues to play with the relationship between the digital image and its consumer.

Made over the course of two years, his film “Compositions for Understanding Relationships” is an animated short that takes the shape of a “love letter.” This concept is examined as various forms of relationships are brought on throughout the film. Taken in out and out of the romantic context, the viewer gazes upon the dynamic play of the variables of composition such as color, form, balance, proportion, and unity. Bleeding images of the human form elicits the emotions of love.

Anniversary – Narrative – 5 min. by Chantel Huston, North Hollywood, CA, US. A woman arrives at the beach to celebrate a special anniversary with her wife under unexpected circumstances.

I Want to Make a Film about Women – Documentary – 12 min. by Karen Pearlman, Sydney, Australia.  A queer, speculative, documentary love letter to Russian constructivist women. It asks what the revolutionary women artists of the 1920s said, what they did, and what they might have created had it not been for Stalin’s suppression.

My Parent, Neal – Documentary – 8 min. by Hannah Saidiner, San Fernando, CA, US. An animated documentary reflecting on the filmmaker’s parent coming out as transgender and how their relationship evolved, as told through domestic spaces, intimate objects, and their shared birthday.

1-1 – Narrative – 7 min. by Naures Sager, Malmö, Sweden. Ayman’s sex date with Jonas gets crashed by his friends Amirah and Samir.  This comedy short takes a hilarious and positive turn as it breaks stereotypes and celebrates diversity.