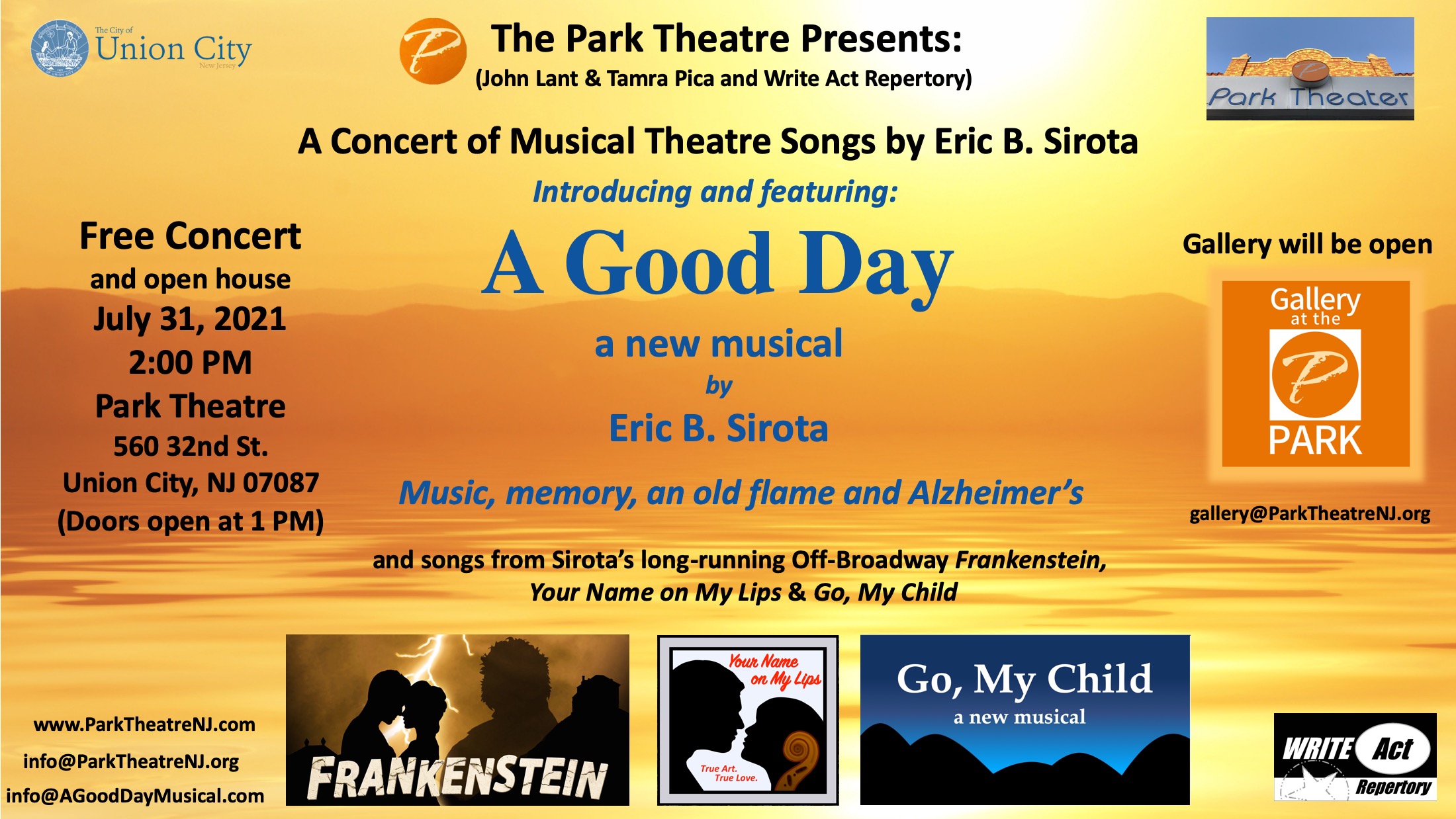 UNION CITY – The Park Theatre is pleased to again open its doors for a one day special event, on Saturday, July 31, for a free concert “A Good Day – A Concert of Musical Theatre Songs by Eric B. Sirota”, with an open house, a re-opened Gallery at the Park, and a peek inside of the refurbishment project in process.

The theatre and art gallery will open at 1 PM, and the concert will begin at 2 PM.

Applicable NJ State COVID-related protocols will be followed and posted.

The Park Theatre, a 1300+ seat house, was built in 1931 and had been an active performing arts venue, made famous by The Passion Play. In recent years it had fallen into disuse and in need of restoration.  Over the past 2 years, a group of passionate volunteers/donors and art professionals have worked tirelessly, turning the Park back again into a viable arts venue. Cleaning, repairing, repainting, replacing carpeting, upgrading lighting . . . and restoring the Park, while lining up many performances and events to make the Park a financially self-sustaining venue, looking towards the future, and honoring its past.

At the beginning of March 2020, a ribbon cutting took place, with a grand opening of the art gallery (Gallery at the Park) with an exhibition of paintings by New Jersey artist Cara London. There was an open house, tours of the theatre and musical performances in the mezzanine lobby which has been turned into a lounge and second performance space. The main theatre was scheduled to have opened a month later and exciting performances were slated through the Spring.
Just a few days after the opening, the pandemic brought everything to a halt.

As life begins to return to normal, we are excited to reintroduce the Park Theatre to the community.

The concert will feature songs from Eric Sirota’s newest musical, A Good Day.  The program will also include songs from Sirota’s Off-Broadway hit Frankenstein, Your Name On My Lips and Go, My Child.  This event is produced by John Lant and Tamra Pica in association with Write Act Repertory.

Eric B. Sirota is a New Jersey based composer/playwright (and highly published research physicist).  Five of his musicals have appeared on New York stages included Frankenstein which played Off-Broadway for 3 years. He is also part of the group of dedicated volunteers and arts professionals who have worked to save and restore the Park Theatre.

Sirota’s newest musical in development is A Good Day.
Music, memory, an old flame and Alzheimer’s – You just hope for a good day.
A widowed artist, finds himself brought into the life of his childhood girlfriend, his first love, his muse, who spurned him over 50 years ago, and who now has Alzheimer’s.
Songs from A Good Day will be premiered and featured in the concert.
“My father had Alzheimer’s, and in his last years, the only way to reach him was through music, singing songs he knew earlier in life.  I decided I wanted to write a musical about the power of music to rekindle memory and awaken the mind.”  – Eric B. Sirota

Sirota’s Frankenstein is a sweeping romantic musical about the human need for love and companionship, based on Mary Shelley’s classic novel.  It has been playing Off-Broadway in NYC for three years, up until the pandemic.  It had been scheduled as the restored Park Theatre’s inaugural production in the Spring of 2020, but was postponed due to the pandemic.  It will be coming to Park Theatre this coming season with both weekend performances and weekday matinee performances for schools.  (www.TheFrankensteinMusical.com)

His musical Your Name On My Lips, a romance about following one’s passion with obsession and commitment, had two productions at Theater for the New City in NYC.  (YourNameOnMyLips.com)

Go, My Child, is about leaving one’s parents, infertility and the search for truth, set against a background of xenophobia;  Set in ancient Mesopotamia, it is an original account of the early lives of familiar biblical characters.  It was presented as staged readings at the Actors Temple Theatre in NYC, and will be produced at the Park Theatre as a large cast musical, and part of the Park’s community outreach programs.  (www.EricSirota.com/go-my-child/)

The musical director Kent Jeong-Eun Kim is composer and pianist, with an MFA from NYU’s Tisch School of the Arts.  As music director, recent Off-Broadway credits include: “Frankenstein” and “Swing.”

Eric B. Sirota is a composer/playwright, having written 5 full-length musicals.  He studied musical composition at Brown University.  He is also a highly published research physicist with a PhD from Harvard.   His musical, Frankenstein, played Off-Broadway at St. Luke’s Theatre for 3 years, following earlier development at NYMF.  Your Name On My Lips with previous development at EAT and MITF, had two productions at Theater for the New City, where Sirota was a resident playwright.  Go, My Child had staged readings at the Actor’s Temple Theatre prior to COVID.  In 2019, he was the recipient of the Denis Diderot Artists-in-Residence grant to attend the Chateau Orquevaux residency where he wrote A Good Day.   As composer (with librettist Vin Morreale Jr.), he wrote A Day at the White House, which was recently recorded as a radio podcast.  Other works include The Flemington Oratorio and a dramatic musical setting of Unetane Tokef.   (www.EricSirota.com)

The artist Cara London earned a BA in Art History from Brandeis University and an MFA from Parsons School of Design. She studied sculpture at the New York Studio School and painting with John Adams Griefen, which profoundly shaped her direction as an artist. London has attended numerous international professional workshops, including Triangle Artists’ Workshop, Vermont Studio School, Emma Lake the Leighton Foundation and most recently Chateau Orquevaux, where she received the Diderot Artist-in-Residence grant.
She was a founding member of SOMI Fine Art Gallery in Flemington. She has exhibited her work regularly and is in numerous collections. She also teaches drawing and painting to students of all ages and levels of experience. Ms. London is known for her painterly representational work. Cara London was among the team who helped restore the Park Theatre and turned the space into a viable gallery. (website: CaraLondon.com)